The Difference Engine: A Novel (Paperback) 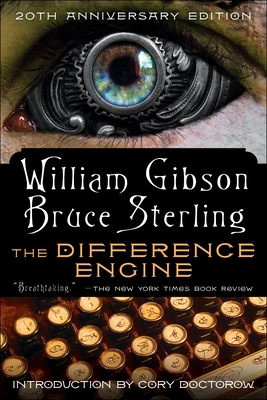 The Difference Engine: A Novel (Paperback)

1855: The Industrial Revolution is in full swing, powered by steam-driven cybernetic Engines. Charles Babbage perfects his Analytical Engine, and the computer age arrives a century ahead of its time. Three extraordinary characters race toward a rendezvous with the future: Sybil Gerard—fallen woman, politician’s tart, daughter of a Luddite agitator; Edward “Leviathan” Mallory—explorer and paleontologist; Laurence Oliphant—diplomat, mystic, and spy. Their adventure begins with the discovery of a box of punched Engine cards of unknown origin and purpose. Cards someone wants badly enough to kill for.

Part detective story, part historical thriller, The Difference Engine took the science fiction community by storm when it was first published twenty years ago. This special anniversary edition features an Introduction by Cory Doctorow and a collaborative essay from the authors looking back on their creation. Provocative, compelling, intensely imagined, this novel is poised to impress a whole new generation.

William Gibson is credited with having coined the term "cyberspace" and having envisioned both the Internet and virtual reality before either existed. He is the author of Neuromancer, Count Zero, Mona Lisa Overdrive, Burning Chrome, Virtual Light, Idoru, All Tomorrow's Parties, Pattern Recognition, Spook Country, Zero History, Distrust That Particular Flavor, and The Peripheral. He lives in Vancouver, British Columbia, with his wife.

Bruce Sterling is an Austin-born science fiction writer and Net critic, internationally recognized as a cyberspace theorist who is also considered one of the forefathers of the cyberpunk movement in science fiction. He has won a John W. Campbell Award, two Hugo Awards, and an Arthur C. Clarke Award.