In the Wilderness: Coming of Age in Unknown Country (Paperback) 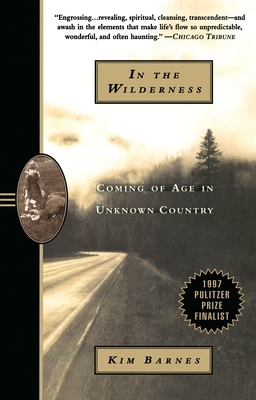 In the Wilderness: Coming of Age in Unknown Country (Paperback)


This book was in stock at the store 24 hours ago but could have sold since then. Please call to confirm if your order is urgent.
Poet Kim Barnes grew up in northern Idaho, in the isolated camps where her father worked as a logger and her mother made a modest but comfortable home for her husband and two children. Their lives were short on material wealth, but long on the riches of family and friendship, and the great sheltering power of the wilderness. But in the mid-1960's, as automation and a declining economy drove more and more loggers out of the wilderness and into despair, Kim's father dug in and determined to stay. It was then the family turned fervently toward Pentecostalism. It was then things changed.

In the Wilderness is the poet's own account of a journey toward adulthood against an interior landscape every bit as awesome, as beautiful, and as fraught with hidden peril as the great forest itself. It is a story of how both faith and geography can shape the heart and soul, and of the uncharted territory we all must enter to face our demons. Above all, it is the clear-eyed and moving account of a young woman's coming of terms with her family, her homeland, her spirituality, and herself.

In presenting Kim Barnes the 1995 PENJerard Fund Award for a work-in-progress by an emerging female writer, the panel of judges wrote that "In the Wilderness is far more than a personal memoir," adding that it stands "almost as a cautionary example of the power of good prose to distinguish whatever it touches." Indeed, In the Wilderness is an extraordinary work, courageous, candid, and exquisitely written.
Kim Barnes is the author of the novel Finding Caruso and two memoirs, In the Wilderness: Coming of Age in Unknown Country—a finalist for the 1997 Pulitzer Prize—and Hungry for the World. She is coeditor with Mary Clearman Blew of Circle of Women: An Anthology of Contemporary Western Women Writers, and with Claire Davis of Kiss Tomorrow Hello: Notes from the Midlife Underground by Twenty-Five Women Over Forty. Her essays, stories, and poems have appeared in a number of journals and anthologies, including The Georgia Review, Shenandoah, MORE magazine, and the Pushcart Prize Anthology. She teaches writing at the University of Idaho and lives with her husband, the poet Robert Wrigley, on Moscow Mountain.