Science and Health with Key to the Scriptures: The Theology of Christian Science, and its Relation to God and the Bible (1910 Edition, Complete) (Paperback) 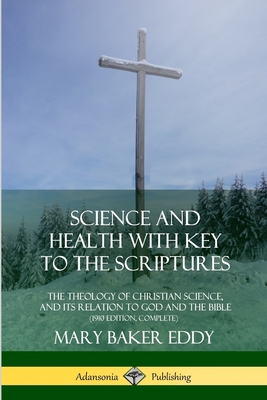 Science and Health with Key to the Scriptures: The Theology of Christian Science, and its Relation to God and the Bible (1910 Edition, Complete) (Paperback)


Estimated arrival to store from West coast warehouse: 2 days. From East coast warehouse: 8 to 10 days.
This book is non-returnable. We will confirm your order with you before placing to be sure you acknowledge and accept.
The primary text of Christian Science, this book explains the beliefs and doctrines, and offers many examples of faith as source of healing energy for true believers. Written by Mary Baker Eddy in the 1870s, the work coins several recognizable terms such as ?God is all? and ?God is mind.? These phrases denote how the power of the Lord is within everything, including our own human minds; spanning matter, energy and the universe, the being of God is infinite and occupies everywhere at every time. Keen to distinguish Christian Science from other, more spiritually intensive movements of metaphysics or the occult, Mary Baker Eddy emphasizes how Christ as God is a great example of the Lord's infinite presence. Many of the accounts later in the book, whereby Christians attest that their beliefs helped them overcome various illnesses, are rooted deep in the traditions of the faith. This edition of the book is adapted from the revised, updated edition of 1910.