Malice of Crows (The Shadow #3) (Paperback) 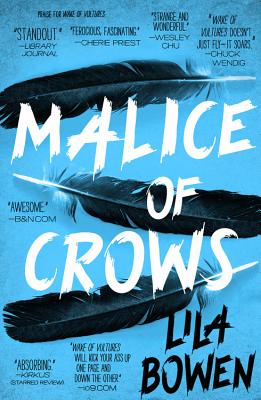 Malice of Crows (The Shadow #3) (Paperback)


Ask us a question if anything isn't clear. Thanks!
Supernatural creatures create chaos across an unforgiving western landscape in the third book of a propulsive and cinematic fantasy adventure series that began with Wake of Vultures.

"I don't care what else you've seen in the bookstore today. Buy this book because it's the thrilling, delightfully written, and important one you've always wanted to read."―Kevin Hearne, New York Times bestselling author on Wake of Vultures

The Ranger known as Rhett has shut down a terrible enterprise running on the blood of magical folk but failed to catch the dark alchemist behind it. And now the Shadow refuses to let him rest.

Rhett must make the ultimate transformation if he has any hope of stopping the alchemist or fulfilling his destiny; he must become the leader of a new Rangers outpost.

But to save his friends, and the lives of countless others, Rhett will first have to lead the Rangers on a mission more dangerous than anything they've ever faced.

Praise for The Shadow series:

"With this latest entry in The Shadow series, Bowen burnishes her particular brand of Western mythic odyssey to a high shine. Outstanding pacing takes us from one exciting, well-crafted scene to another... Extraordinary. ―RT Book Reviews

"Wake of Vultures is, quite simply, brilliant. A mind-bending mix of history, fantasy and folklore, it's a wild bronco of a read that'll leave you breathless for more."―Rachel Caine, New York Times bestselling author

The Shadow
Wake of Vultures
Conspiracy of Ravens
Malice of Crows
Treason of Hawks
Lila Bowen is a pseudonym for Delilah S. Dawson, the writer of Star Wars: Phasma, The Perfect Weapon, and Scorched; the Blud series, the Hit series, Servants of the Storm, and the Ladycastle comic. She won the RT Fantasy of the Year award for Wake of Vultures. Delilah lives in Florida with her family.

"With this latest entry in The Shadow series, Bowen burnishes her particular brand of Western mythic odyssey to a high shine. Outstanding pacing takes us from one exciting, well-crafted scene to another.... Extraordinary."—RT Book Reviews on Malice of Crows

"Rhett is an appealing hero, gruff and prickly on the surface, with deep feeling poorly hidden underneath, and his friends are complex, well-drawn characters. The stakes couldn't be higher, and the story couldn't be more absorbing. Fans of the Shadow will love returning to his world, and fantasy fans who haven't yet encountered this colorful cowboy should hurry up and dive in."—Kirkus (starred review) on Malice of Crows

"Rhett is one of Bowen's (Dawson's) best characters to date, and the world built in this series is rich and complex. One of my favorite new series, to be sure. If you haven't picked up the first book, Wake of Vultures, you really should. Then pick this one up too."—--- Pop Culture Beast on Conspiracy of Ravens

"Bowen's writing is as sharp and superior as ever - her examination of Rhett's growing and complex sexuality and gender identity is wondrous, and is a topic that is truly not being explored anywhere else."—RT Book Reviews on Conspiracy of Ravens

"Gritty and well-realized... The unforgiving western landscape is home to supernatural beasties as diverse as the human inhabitants, and no-nonsense Nettie is pragmatic and brave. Themes of self-worth, gender, and the complexity of identity are treated with frank realism and sensitivity, and the narrative is a love letter to the paranormal western genre."—Publishers Weekly (starred review) on Wake of Vultures

"Of all the books I've reviewed this year, Wake of Vultures' Nettie Lonesome stands out as the most compelling, well-crafted protagonist I've encountered... Bowen's superlative grasp of both character development and worldbuilding elevates a familiar story to mythic heights. "—RT Book Reviews (Top Pick!) on Wake of Vultures

"Bowen's Wake of Vultures overflows with imagination and voice, channeling shades of Stephen King's Gunslinger and Western classics like Unforgiven. Nettie Lonesome is sure to become one of the iconic characters of this generation. This book puts you under its spell and will not let you go!"—Jason M. Hough, New York Times bestselling author on Wake of Vultures

"Bowen has created a fascinating, textured Wild West world...Readers will love this absorbing fantasy adventure [and] its strong, dynamic heroine."—Kirkus (starred review) on Wake of Vultures

"Wake of Vultures is, quite simply, brilliant. A mind-bending mix of history, fantasy and folklore, it's a wild bronco of a read that'll leave you breathless for more."—Rachel Caine on Wake of Vultures

"Nettie Lonesome is a complex, tough, all-around wonderful protagonist. And Lila Bowen is equally wonderful for bringing us Nettie's story, set in a magical old west full of harpies and monster-hunters and stolen children and more. I look forward to more of Nettie's journey."—Jim C. Hines on Wake of Vultures

"I don't care what else you've seen in the bookstore today. Buy this book because it's the thrilling, delightfully written, and important one you've always wanted to read."—Kevin Hearne on Wake of Vultures

"Wake of Vultures doesn't just fly -- it soars. Lila Bowen brings in a wild fantasy quite unlike anything I've ever read, with a voice that's weird and wonderful. Bowen is truly a talent to watch. Hot damn, is this book good."—Chuck Wendig on Wake of Vultures

"Sharp as a silver Bowie and unsentimental as a stray bullet, Lila Bowen's Nettie Lonesome earns a place among the legends of the Weird West."—Matthew Stover on Wake of Vultures

"Wake of Vultures is a ferocious, fascinating take on the magical Old West - creatively and unsentimentally grim, yet rich with hope and heart."—Cherie Priest on Wake of Vultures

"Nettie Lonesome kicks major ass. There is something strange and wonderful going on in Lila Bowen's head. It's the weird west fantasy that I never knew I've always wanted to read. Now I need more!"—Wesley Chu on Wake of Vultures