Atomic Women: The Untold Stories of the Scientists Who Helped Create the Nuclear Bomb (Paperback) 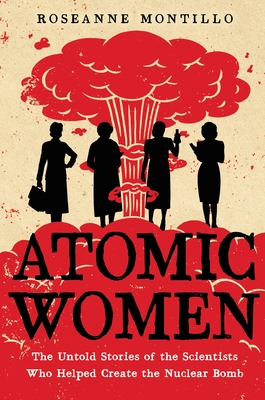 Atomic Women: The Untold Stories of the Scientists Who Helped Create the Nuclear Bomb (Paperback)


Estimated arrival to store from West coast warehouse: 2 days. From East coast warehouse: 8 to 10 days.
Bomb meets Code Girls in this nonfiction narrative about the little-known female scientists who were critical to the invention of the atomic bomb during World War II.

They were leaning over the edge of the unknown and afraid of what they would discover there—meet the World War II female scientists who worked in the secret sites of the Manhattan Project. Recruited not only from labs and universities from across the United States but also from countries abroad, these scientists helped in—and often initiated—the development of the atomic bomb, taking starring roles in the Manhattan Project. In fact, their involvement was critical to its success, though many of them were not fully aware of the consequences.

The atomic women include:
This book explores not just the critical steps toward the creation of a successful nuclear bomb, but also the moral implications of such an invention.
Roseanne Montillo is the author of three works of nonfiction, Fire on the Track, The Lady and her Monsters, and The Wilderness of Ruin. She holds an MFA in Creative Writing from Emerson College, where she taught courses on the intersection of literature and history. She lives outside of Boston.

"Montillo's detailed and organized writing stresses the importance of these women, who were as indispensable to the Manhattan Project as more well-known men."—School Library Journal

"Recommended for readers with an interest in the sciences, women's studies, and who support the ethic of giving women their due for their accomplishments."—School Library Connection

"Lively, well-researched, and comprehensible. A useful work of scientific history."—Kirkus

"An eye-opening historical reconstruction that respects the intellectual diversity of the women behind and within the Manhattan Project."—BCCB

"Montillo's woman-centered narrative fills a major gap in the popular understanding of how the atomic bomb came to be."—Publishers Weekly

"A well-researched book on women scientists and their roles in developing the atomic bomb."—Booklist