The First Notes: The Story of Do, Re, Mi (Hardcover) 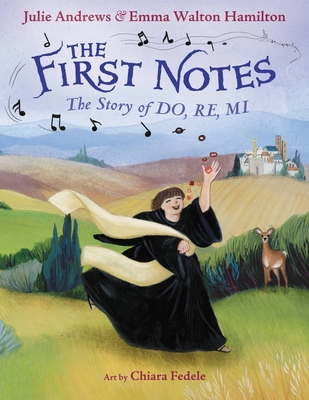 The First Notes: The Story of Do, Re, Mi (Hardcover)


Coming Soon - Please Pre-Order Now
A stunning new picture book from beloved icon Julie Andrews and her daughter, Emma Walton Hamilton, that introduces readers to the remarkable story of the development of written music, and speaks to the beauty of music and the power of perseverance. Featuring the illustrated lyrics to “Do-Re-Mi” and an author’s note about Julie Andrews’s connection to the classic Rodgers & Hammerstein song!

Centuries ago, a young Italian monk named Guido longed to find a way to write and teach music. Eventually, he created the musical scale, using the words Do-Re-Mi-Fa-Sol-La-Ti-Do...one syllable for each note. Though the other monks thought it was a waste of time, Guido's music couldn't be silenced. His discovery remains the foundation for learning music today, and inspired the famous song “Do-Re-Mi,” which Julie Andrews sang in the beloved movie The Sound of Music.

This richly illustrated picture book from beloved icon Julie Andrews and her daughter, bestselling author Emma Walton Hamilton, introduces readers to the remarkable story of Guido d’Arezzo’s development of musical notation. In addition to the lyrics of "Do-Re-Mi" illustrated in full color, the backmatter includes an author’s note, extensive historical notes, and a glossary.
Julie Andrews's legendary career encompasses the Broadway and London stages, as well as multiple films, television shows, album releases, concert tours, directing assignments, and the world of children's publishing. In 2000 the title of Dame Commander of the British Empire was bestowed upon her by Queen Elizabeth II for lifetime achievements in the arts and humanities. Her many other honors include a Kennedy Center honor in the fall of 2001. She was married to film director Blake Edwards for forty-one years, and the couple have five children, ten grandchildren, and three great-grandchildren.

Emma Walton Hamilton is an award-winning writer, producer and arts educator. Together with her mother, Julie Andrews, she has written over thirty books for children and young adults, including the New York Times bestselling Very Fairy Princess series. Emma is on the faculty of Stony Brook University's MFA in Creative Writing, where she serves as director of the Children's Lit Fellows and the Young Artists and Writers Project.

Chiara Fedele was born in Milan, Italy. She has a degree in Illustration from La Scuola del Fumetto in Milan, and has illustrated numerous picture books and received several awards, such as the 3×3 international illustration award merit in 2019. She currently lives in Italy with her family and pets.