How to Argue & Win Every Time: At Home, At Work, In Court, Everywhere, Everyday (Paperback) 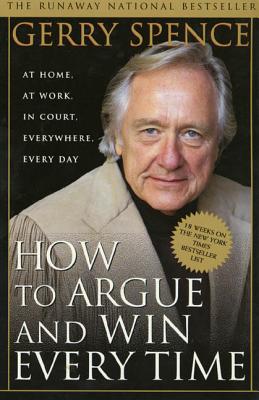 How to Argue & Win Every Time: At Home, At Work, In Court, Everywhere, Everyday (Paperback)

The Laws of Arguing According to Gerry Spence

1. Everyone is capable of making the winning argument.
2. Winning is getting what we want, which also means helping "others" get what they want.
3. Learn that words are a weapon, and can be used hostilely in combat.
4. Know that there is always a "biological advantage" of delivering the TRUTH.
5. Assault is not argument.
6. Use fear as an ally in pubic speaking or in argument. Learn to convert its energy.
7. Let emotions show and don't discourage passion.
8. Don't be blinded by brilliance.
9. Learn to speak with the body. The body sometimes speaks more powerfully than words.
10. Know that the enemy is not the person with whom we are engaged in a failing argument, but the vision within ourselves.

Gerry Spence has been a trial attorney for more than five decades and proudly represents "the little people." He has fought and won for the family of Karen Silkwood, defended Randy Weaver at Ruby Ridge, and represented hundreds of others in some of the most notable trials of our time. He is the founder of Trial Lawyer's College, a nonprofit school where, pro bono, he teaches attorneys for the people how to present their cases and win against powerful corporate and government interests. He is the author more than a dozen books, including The New York Times bestseller How to Argue and Win Every Time, From Freedom to Slavery, Give Me Liberty, and The Making of a Country Lawyer, and is a nationally known television commentator on the famous trials of our time. He lives in Jackson Hole, Wyoming.

“How to Argue and Win Every Time is more than just a book about argument; it's the outline on how to live.” —Larry king

“Gerry Spence is one of America's last true originals--a man who thinks as brilliantly as he lives, who writes as compellingly as he talks, and who practices law as faithfully as most people practice religion.” —Dan Rather