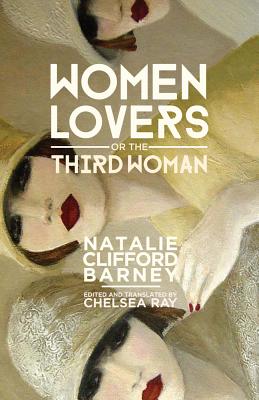 
This book was in stock at the store 24 hours ago but could have sold since then. Please call to confirm if your order is urgent.
This long-lost novel recounts a passionate triangle of love and loss among three of the most daring women of belle époque Paris. In this barely disguised roman à clef, the legendary American heiress, writer, and arts patron Natalie Clifford Barney, the dashing Italian baroness Mimi Franchetti, and the beautiful French courtesan Liane de Pougy share erotic liaisons that break all taboos and end in devastation as one unexpectedly becomes the “third woman.” Never before published in English, and only recently published in French, this modernist, experimental work has been brought to light by Chelsea Ray’s research and translation.
Natalie Clifford Barney (1876–1972) was an American-born writer of poems, epigrams, and memoirs. She was also well known for her weekly salon in Paris that drew avant-garde writers, artists, musicians, and intellectuals to her home for more than sixty years. Chelsea Ray is an associate professor of French and comparative literature at the University of Maine at Augusta. She has been honored as a Chevalier des palmes académiques by France’s Ministry of Education.
“Women Lovers has shown me a Natalie that I never knew, a fragile Natalie. This novel is an amazing revelation.”—Jean Chalon, author of Portrait of a Seductress

“Barney’s experimentation in Women Lovers with offbeat structural choices and narrative strategies, and its stylistic allegiances to decadent traditions, indicate how much of literary modernism’s rich texture has been ironed out in the writing and rewriting of that literary history.”—Tirza T. Latimer, author of Women Together/Women Apart

“A first-ever translation that shines new light on Natalie Barney, the invincible ‘Amazon,’ sexual rebel, and arch-seducer of women who in the 1920s aspired to make Paris ‘the Sapphic Centre of the Western World.’ Chelsea Ray shows us another side to her: vulnerable, jealous, and volatile in love.”—Diana Souhami, author of Natalie and Romaine


“This book couldn’t have been published in 1926; even now it’s sometimes a bit shocking.”—Suzanne Rodriguez, author of Wild Heart

“Leaps energetically to life. . . . [This] autobiographical, sprightly 1926 novel of a Belle Époque lesbian love triangle [is] appearing in English for the first time.”—Shelf Awareness