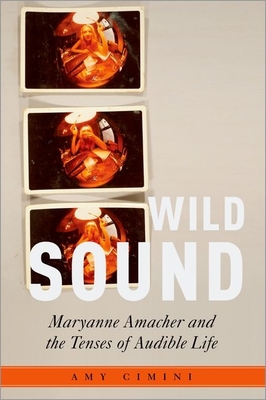 
Ask us a question if anything isn't clear. Thanks!
We haven't even made it to breakfast was a phrase often used by composer Maryanne Amacher (1938-2009) to shorthand her critical and partial approach to knowledge production across the vast artistic, technical, and scientific discourses with which she worked. The same could be said about her
own musical thought, which encompassed original presentational formats in existing and speculative media and approaches to sound and listening that conjoined real and imagined social worlds. Wild Sound: Maryanne Amacher and the Tenses of Audible Life discerns meeting points between frameworks for life that emerged from Amacher's multidisciplinary study of sound and listening: within acoustical spectra, inside human bodies and ears, across cities and edgleands, hypothetical creatures and
virtual, fictive or distanciated environments. These figurations guide interpretative study of six signal projects: Adjacencies (1965/1966); City-Links (1967-1988); Additional Tones (1976 / 1988), Music for Sound-Joined Rooms (1980), Mini Sound Series (1985) and Intelligent Life (1980s) and
countless sketches, notes and unrealized projects. Author Amy Cimini explores Amacher's working methods with an interpretive style that emphasizes technical study, conceptual juxtaposition, intertextual play, and narrative transport.

Amy Cimini is Assistant Professor of music at UC San Diego in the Integrative Studies Area. Her research, teaching and performance engage 20th century philosophy and political thought with an emphasis on embodiment and ethics in experimental practice. Dr. Cimini is co-editor of Maryanne Amacher: Selected Writings and Interviews (2021). She is also a violist who has recorded and toured extensively with experimental music ensembles and as a solo artist.