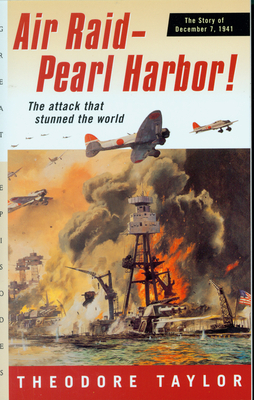 
Ask us a question if anything isn't clear. Thanks!
On December 7, 1941, Americans were stunned to learn that Japanese forces had launched an attack on Pearl Harbor. In this engrossing and extensively researched account, Theodore Taylor examines both sides of the battle, taking a close look at the events leading up to it and providing compelling insight into the motives and operations of the brave men and women swept up in the fight.

THEODORE TAYLOR (1921-2006), an award-winning author of many books for young people, was particularly known for fast-paced, exciting adventure novels. His books include the bestseller The Cay, Timothy of the Cay, The Bomb, Air Raid--Pearl Harbor!, Ice Drift, The Maldonado Miracle, and The Weirdo, an Edgar Award winner for Best Young Adult Mystery.