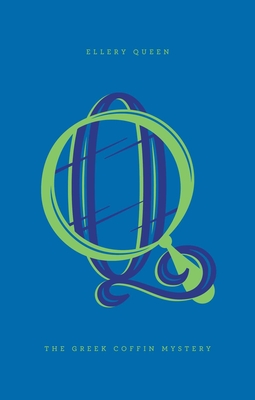 It all begins with a letter. Fall in love with Penguin Drop Caps, a new series of twenty-six collectible and hardcover editions, each with a type cover showcasing a gorgeously illustrated letter of the alphabet. In a design collaboration between Jessica Hische and Penguin Art Director Paul Buckley, the series features unique cover art by Hische, a superstar in the world of type design and illustration, whose work has appeared everywhere from Tiffany & Co. to Wes Anderson's recent film Moonrise Kingdom to Penguin's own bestsellers Committed and Rules of Civility. With exclusive designs that have never before appeared on Hische's hugely popular Daily Drop Cap blog, the Penguin Drop Caps series debuted with an 'A' for Jane Austen's Pride and Prejudice, a 'B' for Charlotte Brönte's Jane Eyre, and a 'C' for Willa Cather's My Ántonia. It continues with more perennial classics, perfect to give as elegant gifts or to showcase on your own shelves.

Q is for Queen. Ellery Queen is a fictional detective regarded by many as the definitive American detective-hero, rivaling Nero Wolfe as the successor to Sherlock Holmes. "Ellery Queen" also serves as the joint pseudonym for the creators, cousins Frederic Dannay and Manfred Lee. In a successful series of novels and short stories that covered 42 years, Ellery Queen was the best known American fictional detective during the 1930s and 1940s.

The Greek Coffin Mystery (1932) is considered one of the earliest, most popular, confounding, brilliantly plotted classic whodunit mysteries of the Ellery Queen series, involving a dead and blind art dealer, a slain forger, a stolen priceless painting and the disappearance of a mysterious will from a New York townhouse full of suspects. During the funeral of famous art dealer Georg Khalkis, the metal box containing his last will and testament had vanished from the library safe. Son of a New York cop, Ellery Queen, a young master of deduction, orders a search of the coffin. To the horror of both detectives and mourners, when the coffin is unearthed, a second corpse, strangled and decaying, is found with the late Georg Khalkis.
ELLERY QUEEN is the pen name of two cousins from Brooklyn, NY, Frederic Dannay (1905–1982) and Manfred B. Lee (1905–1971), as well as the name of their famous fictional detective. Dannay and Lee created Ellery Queen in 1928 and spent over four decades writing and editing under the pseudonym, spanning radio, television, comics, board games, and film. Leading the Golden Age of “whodunit” mysteries, Dannay and Lee also cofounded Ellery Queen's Mystery Magazine, one of the most influential crime publications of all time.

JESSICA HISCHE is a letterer, illustrator, typographer, and web designer. She currently serves on the Type Directors Club board of directors, has been named a Forbes Magazine "30 under 30" in art and design as well as an ADC Young Gun and one of Print Magazine’s "New Visual Artists". She has designed for Wes Anderson, McSweeney's, Tiffany & Co, Penguin Books and many others. She resides primarily in San Francisco, occasionally in Brooklyn.
Winner of the 2012 Fifty Books/Fifty Covers show, organized by Design Observer in association with AIGA and Designers & Books

"After Poe, I think it's true that Ellery Queen was the most significant and important writer of mystery fiction in America."
—Otto Penzler

"[Penguin Drop Caps] convey a sense of nostalgia for the tactility and aesthetic power of a physical book and for a centuries-old tradition of beautiful lettering."
—Fast Company

"The Penguin Drop Caps series is a great example of the power of design. Why buy these particular classics when there are less expensive, even free editions of Great Expectations? Because they’re beautiful objects. Paul Buckley and Jessica Hische’s fresh approach to the literary classics reduces the design down to typography and color. Each cover is foil-stamped with a cleverly illustrated letterform that reveals an element of the story. Jane Austen’s A (Pride and Prejudice) is formed by opulent peacock feathers and Charlotte Bronte’s B (Jane Eyre) is surrounded by flames. The complete set forms a rainbow spectrum prettier than anything else on your bookshelf."
—Rex Bonomelli, The New York Times