The Doctrine and Ritual of High Magic: A New Translation (Paperback) 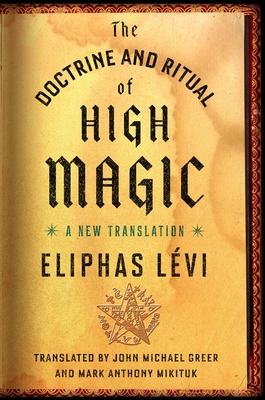 The Doctrine and Ritual of High Magic: A New Translation (Paperback)


Estimated arrival to store from West coast warehouse: 2 days. From East coast warehouse: 8 to 10 days.
Filling a huge gap in our spiritual culture, here--at last--is a comprehensive and elegant translation of the 1854 French masterwork of occult philosophy.

The Doctrine and Ritual of High Magic reignited the esoteric spiritual search in the West and led to the emergence of Madame Blavatsky, Manly P. Hall, and the New Age revolution.

Lévi's study of magic is an absolute must for every seeker in occult, esoteric, and druidic realms; but this need has been frustrated by dated and inaccurate translations--until now. Greer, a respected occult scholar, and Mikituk, a masterful translator, collaborate to restore this landmark work--complete with its original illustrations and symbols--to the center of the alternative spiritual canon.
JOHN MICHAEL GREER is a widely respected author, translator, and blogger in the occult field. He is most recently the editor of the new, substantially revised seventh edition of Israel Regardie's occult landmark The Golden Dawn (Llewellyn 2016). MARK MIKITUK, currently a resident of France, has extensive experience as a translator and has also taught English to Francophone students. This is his first book project.
“Greer and Mikituk have succeeded in reestablishing Lévi’s grand transcultural synthesis in a form more relevant to and understandable for the modern occultist.”
--Fortean Times

“Lévi’s contribution was a powerful one, and his ideas deserve to be grasped by those who are exploring the Ancient Wisdom as it has manifested in the modern west. To this end, this new translation is admirably suited.—Richard Smoley, Quest magazine