In the Shadow of the Moon: America, Russia, and the Hidden History of the Space Race (Hardcover) 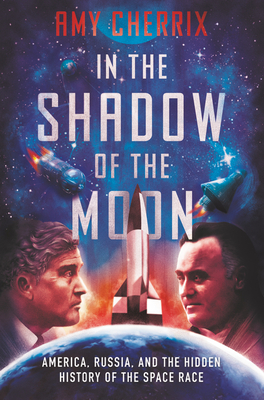 In the Shadow of the Moon: America, Russia, and the Hidden History of the Space Race (Hardcover)

An exhilarating dive into the secret history of humankind’s race to the moon, from acclaimed author Amy Cherrix. This fascinating and immersive read is perfect for fans of Steve Sheinkin’s Bomb and M. T. Anderson’s Symphony for the City of the Dead.

You’ve heard of the space race, but do you know the whole story?

The most ambitious race humankind has ever undertaken was masterminded in the shadows by two engineers on opposite sides of the Cold War—Wernher von Braun, a former Nazi officer living in the US, and Sergei Korolev, a Russian rocket designer once jailed for crimes against his country—and your textbooks probably never told you.

Von Braun became an American hero, recognized the world over, while Korolev toiled in obscurity. These two brilliant rocketeers never met, but together they shaped the science of spaceflight and redefined modern warfare. From Stalin’s brutal Gulag prisons and Hitler’s concentration camps to Cape Canaveral and beyond, their simultaneous quests pushed science—and human ingenuity—to the breaking point.

From Amy Cherrix comes the extraordinary hidden story of the space race and the bitter rivalry that launched humankind to the moon.

Amy Cherrix is the author of the middle grade nonfiction books Backyard Bears: Conservation, Habitat Changes, and the Rise of Urban Wildlife and Eye of the Storm: NASA, Drones, and the Race to Crack the Hurricane Code, a Subaru Prize for Excellence in middle grade science book finalist. In her nonwriting life, Amy is the children’s book buyer at Malaprop’s Bookstore in Asheville, North Carolina. This is her first book for teens. You can find her online at www.amycherrix.com.

“A well-researched, detailed account of two leading engineers in the space race that raises questions about the human costs of war and propaganda…. Engrossing and painfully relevant.” — Kirkus Reviews

“A book that reads, at times, like a Cold War spy novel…. Cherrix, who uses formerly classified documents as sources, excels in placing each advancement in its historical context, from the 1930s through the Apollo program…. This account reveals important truths in a style that will captivate teen readers.”  — Booklist

“The cherchez les hommes approach used so successfully by Steve Sheinkin in Bomb works just as effectively here, offering readers a brightly defined trail to follow through the morass of historical machination. YA history readers frustrated by an information gap between the race for the bomb and the race to the moon will find this the essential—and thrilling—infill they’ve missed.” — Bulletin of the Center for Children’s Books

“The text adds depth to the history of the space race, with thoughtful, ethical discussions of the U.S. concealing von Braun’s history to further its agenda…. An engaging, fast-paced narrative that will delight readers of history and space technology.” — School Library Journal

“[A] suspenseful, engaging narrative.... [An] eye-opening look into a typically venerated aspect of American history.” — The Horn Book

“This comprehensive narrative nonfiction chronicle reveals the personalities and machinations behind the space race.… This rousing history testifies to both the romance and cost of technological advancement.” — Publishers Weekly

“An explosive exposé on the scandals and lies behind the race to the moon! I learned so much I didn't know. This exciting, fact-filled page-turner will have you rethinking everything you thought you knew about the heroes and villains of the Soviet-American Space Race.” — Alan Gratz, New York Times bestselling author of Allies and Refugee

“This is a fascinating and complex story I knew nothing about! I learned so much, and I know readers will, too.” — Deborah Heiligman, award-winning author of Torpedoed: The True Story of the World War II Sinking of “The Children’s Ship”