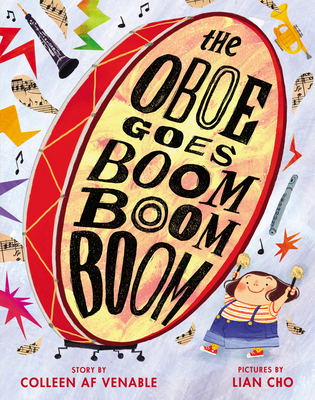 “A fun, goofy read-aloud highlighting the science behind musical instruments and the sounds they make. Going page by page, instrument by instrument, The Oboe Goes Boom Boom Boom is the perfect way to introduce young children to the instruments in a concert band and to some of the most famous people who played them.”
— Angie Tally, The Country Bookshop, Southern Pines, NC

No matter where you are, you can find the perfect instrument and join this band! A winning pick for young readers who adore books by Jory John, Mac Barnett, and Christian Robinson.

The band director knows everything about all the instruments, and he can’t wait to help find the perfect one for you. But an irrepressible young girl keeps interrupting with enthusiastic BOOM BOOM BOOMS on her drum. At least until the band director introduces one instrument that’s even louder.

This joyous picture book will leave young readers eager to pick up an instrument and learn how to play! The Oboe Goes Boom Boom Boom celebrates music and will entertain young readers in the home and classroom alike.

Each child in the band is inspired by a real-life musician, and biographies are included at the end of the book.

Colleen AF Venable is the author of the picture books The Oboe Goes Boom Boom Boom, Mervin the Sloth Is About to Do the Best Thing in the World, and Amy the Red Panda Is Writing the Best Story in the World. She is also the author of several graphic novels, including Katie the Catsitter, the Guinea Pig: Pet Shop Private Eye series, and Kiss Number 8, which was longlisted for the 2019 National Book Award. Colleen AF Venable lives in Brooklyn, NY.

Lian Cho is a graduate of the School of Visual Arts in New York City. She is a Society of Illustrators Student Competition Finalist and received the Rhodes Family Award for Achievement in Illustration. She has created artwork for Sesame Workshop and the New Yorker, as well as for Lalani of the Distant Sea by Erin Entrada Kelly. The Oboe Goes Boom Boom Boom is her first picture book. Lian Cho grew up in Taiwan and New Zealand, and now lives in Brooklyn, New York.

"Equal parts comical and deeply informative. . . . Venable’s text is interwoven with threads of humor, charm, and creativity. . . . Cho’s bright, eye-popping illustrations create a happy chaos on the page, and one can almost imagine the cacophony of a room full of children practicing their instruments. An altogether delightful introduction to musical instruments." — School Library Journal (starred review)

“As a band director instructs the new band members on the different instruments they can play, he must also contend with a very enthusiastic drummer. . . . There is an irrepressible feeling of energy in the illustrations . . . further emphasized by playful and colorful typography. . . . A lively introduction to some musical instruments.” — Kirkus Reviews

“Each time jolly-looking band director Mr. V. . . .  gives a student the opportunity to play their instrument of choice, he’s interrupted by little Felicity, who has already discovered her love of whaling on an enormous drum. . . . Frisky typography and balloons of musical notation float through the air, and visual nudges and jokes elevate the story . . . The afterword includes short, inclusive bios of diverse real-life classical, rock, and jazz musicians upon whom the book’s characters are based.” — Publishers Weekly

“Band director Mr. V introduces a diverse class of students to seven instruments. Mr. V places each in its musical family, sometimes offering a little history, and briefly describes how it works, how to play, and how it sounds. . . . The lighthearted narrative and lively cartoon illustrations balance humor and information nicely. Back matter provides some biographical information about seven professional musicians (who make cameos as the students).” — Horn Book Magazine