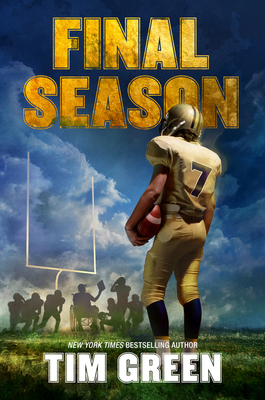 With two all-star college football players for brothers and a former Atlanta Falcons defensive lineman for a father, it is only natural for sixth-grade quarterback Benjamin Redd to follow in their footsteps.

However, after his dad receives a heartbreaking ALS diagnosis—connected to all those hard hits and tackles he took on the field—Ben’s mom becomes more determined than ever to get Ben to quit football.

Ben isn’t playing just for himself though. This might be his dad’s last chance to coach. And his teammates need a quarterback that can lead them to the championships. But as Ben watches the heavy toll ALS takes on his dad’s body, he begins to question if this should be his final season after all.

Tim Green, for many years a star defensive end with the Atlanta Falcons, is a man of many talents. He's the author of such gripping books for adults as the New York Times bestselling The Dark Side of the Game and American Outrage. Tim graduated covaledictorian from Syracuse University and was a first-round draft pick. He later earned his law degree with honors, and he has also worked as an NFL commentator for FOX Sports and NPR.

His first book for young readers, Football Genius, inspired in part by his players and his own kids, became a New York Times bestseller and was followed by Football Hero, Football Champ, The Big Time, and Deep Zone. He drew on his experiences playing and coaching Little League for Rivals and Pinch Hit and two more New York Times bestsellers: Baseball Great and Best of the Best.

Bestselling author Jon Scieszka called Tim Green's Unstoppable, a book about a boy's struggle with cancer that debuted at #2 on the New York Times bestseller list, "Absolutely heroic. And something every guy should read."

Tim Green lives with his wife, Illyssa, and their five children in upstate New York.

"The sport’s allure comes through in a series of exciting clashes, with on-field heroics on the way to a last-yard, smash-mouth finale. An intense referendum on football’s dangers and glories." — Kirkus Reviews (starred review)

"While football fans will enjoy the play-by-play action, the heart of the story lies in its depiction of strong family relationships. A winning sports novel, on and off the field." — Booklist