The Courage to Compete: Living with Cerebral Palsy and Following My Dreams (Hardcover) 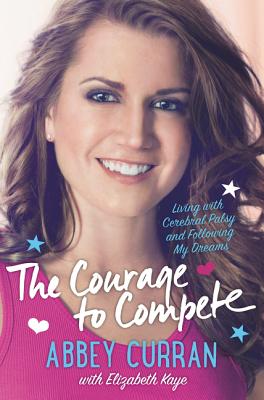 The Courage to Compete: Living with Cerebral Palsy and Following My Dreams (Hardcover)

A remarkable memoir by Miss Iowa USA Abbey Curran about living with cerebral palsy, competing in Miss USA, and her inspiring work with young women who have disabilities.

Abbey Curran was born with cerebral palsy, but early on she resolved to never let it limit her. Abbey made history when she became the first contestant with a disability to win a major beauty pageant. After earning the title of Miss Iowa, she went on to compete in Miss USA.

Growing up on a hog farm in Illinois, Abbey competed in local pageants despite naysayers who told her not to. After realizing her own dream, she went on to help other disabled girls achieve their goals by starting Miss You Can Do It, a national nonprofit pageant for girls and women with special needs and challenges, which became the subject of an HBO documentary with the same name. This is Abbey’s story.

Abbey Curran, born with cerebral palsy, made history as the first person with a disability to compete in major beauty pageants when she was crowned Miss Iowa USA in 2008, and competed in the Miss USA pageant. While still in high school, she founded the Miss You Can Do It pageant, for young women with disabilities ranging in age from five to twenty-five, designed to illustrate Abbey's core belief that you can do anything if you are willing to try.

The pageant became the subject of an HBO documentary titled Miss You Can Do It, and Abbey has appeared on CBS's The Early Show, The Ellen DeGeneres Show, Access Hollywood, CNN Headline News, and Fox & Friends. Abbey graduated from Saint Ambrose University, where she earned a bachelor's degree in business communications. Always seeking ways to be of help to others, she is currently in nursing school.

Elizabeth Kaye is an award-winning journalist who has written five books on subjects ranging from the Los Angeles Lakers to American Ballet Theatre. Her most recent ebook, Lifeboat No. 8: An Untold Tale of Love, Loss, and Surviving the Titanic, rose to #1 on the Amazon and New York Times ebook bestseller lists.

“The teenager is honest about her struggles, from wearing leg braces to coping with her parents’ divorce. She exudes hope, confidence, determination, and bravery. VERDICT Adolescents will be motivated to pursue their own dreams after reading this stirring title.” — School Library Journal

“Debunking myths about pageant participants, she praises the sisterhood she found and the hope pageants give “[her] girls,” a happy ending to a tale of accomplishment.” — Kirkus Reviews

“Curran’s story will inspire readers to follow their dreams.” — Booklist

“hHr overall message-to try, to dream, to put oneself out there-is an uplifting one that will continue to inspire.” — Voice of Youth Advocates (VOYA)