Outlaws of Time: The Legend of Sam Miracle (Paperback) 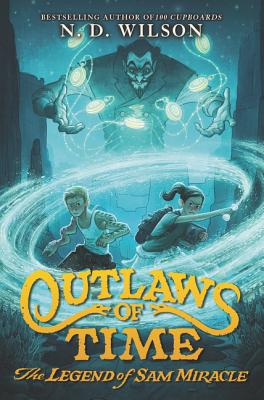 Outlaws of Time: The Legend of Sam Miracle (Paperback)

This is book number 1 in the Outlaws of Time series.

From the bestselling author of 100 Cupboards comes a new time travel series that New York Times bestselling author Peter Lerangis says is full of “wild action, mind-bending fantasy, and unforgettable characters.” Crackling with action, adventure, and magic, this spellbinding story is a must-read for fans of Brandon Mull and Soman Chainani. Now available in paperback.

Sam Miracle’s life is made up of dreams that come to him when he’s wide awake. They take him to another place and time, where he’s a courageous, legendary hero instead of a foster kid with two bad arms that can barely move. Sometimes these dreams feel so real, they seem like forgotten memories. And sometimes they make him believe that his arms might come alive again.

But Sam is about to discover that the world he knows and the world he imagines are separated by one thing: time. And that separation is only an illusion. The laws of time can be bent and shifted by people with special magic that allows them to travel through the past, present, and future. One of these “time walkers” is out to protect Sam so that he can accept his greatest destiny, and another is out to kill him so that a prophecy will never be fulfilled. However, it’s an adventurous girl named Glory and two peculiar snakes who show Sam the way through the dark paths of yesterday to help him make sure there will be a tomorrow for every last person on earth.

N. D. Wilson lives and writes in the top of a tall, skinny house only one block from where he was born. But his bestselling novels have traveled far and wide, disguising themselves in many strange languages in dozens of distant and mysterious lands. He is the author of ten novels, including the Outlaws of Time series, the Ashtown Burials series, and the 100 Cupboards trilogy. He and his wife have five young storytellers of their own, along with an unreasonable number of pets. www.ndwilson.com

“An entertaining romp… that lays groundwork for future installments in the Outlaws of Time series.” — Publishers Weekly

“A lightning fast adventure with one breathless action scene after another.” — J.A. White, author of the Thickety series

“An exciting adventure with relentless action and more twists and turns than a sidewinder snake on the hunt.” — Michael Northrop, New York Times bestselling author of the Tombquest series