The Black Hand: The Bloody Rise and Redemption of "Boxer" Enriquez, a Mexican Mob Killer (Paperback) 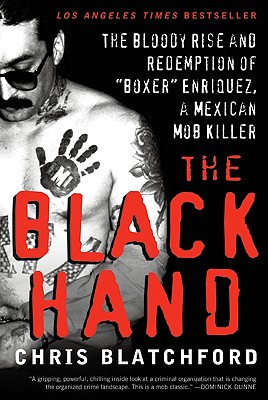 The Black Hand: The Bloody Rise and Redemption of "Boxer" Enriquez, a Mexican Mob Killer (Paperback)

THE BLACK HAND is the true story of Rene Enriquez, aka "Boxer," and his rise in a secret criminal organization, a new Mafia, that already has a grip on all organized crime in California and soon all of the United States. This Mafia is using a base army of an estimated 60,000 heavily armed, loyal Latino gang members, called Surenos, driven by fear and illicit profits. They are the most dangerous gang in American history and they wave the flag of the Black Hand.

Mafioso Enriquez gives an insider′s view of how he devoted his life to the cause--the Mexican Mafia, La Familia Mexicana, also known as La Eme--only to find betrayal and disillusionment at the end of a bloody trail of violence that he followed for two decades.

And now, award-winning investigative journalist Chris Blatchford, with the unprecedented cooperation of Rene Enriquez, reveals the inner workings, secret meetings, and elaborate murder plots that make up the daily routine of the Mafia brothers. It is an intense, never-before-told story of a man who devoted his life to a bloody cause only to find betrayal and disillusionment.

Based on years of research and investigation, Chris Blatchford has delivered a historic narrative of a nefarious organization that will go down as a classic in mob literature.

Chris Blatchford is an investigative reporter and author of the Los Angeles Times bestseller Three Dog Nightmare. He has won numerous commendations and awards for his reports, including nine Emmy Awards and a Peabody for his investigation into Italian Mafia infiltration of MCA/Universal's music and home video divisions. He lives in Los Angeles.

“Blatchford is well-suited to tell this story . . . he captures the nuances and nihilism of the prison world . . . The narrative is interspersed with fascinating prison arcana.” — Los Angeles Times

“A gripping, powerful, chilling inside look at a criminal organization that is changing the organized crime landscape. This is a mob classic.” — Dominick Dunne

“A fascinating, vivid and unforgettable insider’s look at the bloody, secret and deadly Mexican Mafia. Chris Blatchford’s compulsively readable wake-up call spares no one and names everyone, including the politicians who aid and abet this dangerous criminal organization, through corruption, maddening naiveté, or political correctness.” — Joseph Wambaugh

“A courageous and well-written exposé on one of the most ruthless and powerful gangs of all, the Mexican Mafia. Chris Blatchford reaffirms his position as being among Americans greatest investigative reporters.” — Vincent Bugliosi, author of Helter Skelter

“Chris Blatchford has hit a grand slam. The Black Hand is an important page turning book that will take you into a frightening dark world that shouldn’t exist… but it does. It’s riveting, and when you finish the book, you’ll get up and lock your doors. Highly recommended.” — William "Billy" Queen, retired special agent ATF and bestselling author of Under and Alone

“A fascinating look at the world of the Mexican Mafia, more ruthless than the LCN. A must read for law enforcement and a tribute to the courage of ‘dropout’ Rene ‘Boxer’ Enriquez.” — Joe Pistone, aka Donnie Brasco