Life Beyond Measure: Letters to My Great-Granddaughter (Paperback) 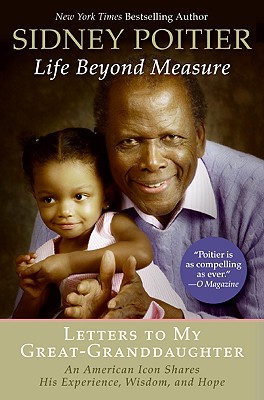 Life Beyond Measure: Letters to My Great-Granddaughter (Paperback)

The author of The Measure of a Man and one of the most revered actors in the history of Hollywood offers a book that features inspirational advice and personal stories from his extraordinary life. Written in the form of extended letters to his new great-granddaughter, Sidney Poitier offers perspective and wisdom gained from his memories of being a boy in the Bahamas; breaking the race barrier in theater and film during the Civil Rights Era; achieving stardom and success in Hollywood; and as a diplomat and humanitarian. In his role as father, grandfather, and great-grandfather, Poitier shares his experience of the most important passages in life.

Sidney Poitier was the first black actor to win the Academy Award for best actor for his outstanding performance in Lilies of the Field in 1963. His landmark films include The Defiant Ones, A Patch of Blue, Guess Who's Coming to Dinner, and To Sir, With Love. He has starred in over forty films, directed nine, and written four. He is the author of two autobiographies: This Life and the "Oprah's Book Club" pick and New York Times bestseller The Measure of a Man. Among many other accolades, Poitier has been awarded the Screen Actors Guild's highest honor, the Life Achievement Award, for an outstanding career and humanitarian accomplishment. He is married, has six daughters, four grandchildren, and one great-granddaughter.

“It’s typical of Poitier’s modesty that what may be his last book is not another celebration of his triumphs but a collection of lessons learned by that wise old actor, passed on to generations who might never truly understand how he changed movies.” — The Los Angeles Times

“Some people aren’t satisfied to be dashing, principled, talented, influential, and legendary; they have to keep giving of themselves. In Life Beyond Measure, Poitier unaffectedly muses on life’s mysteries, as compelling as ever in his ninth decade.” — O Magazine