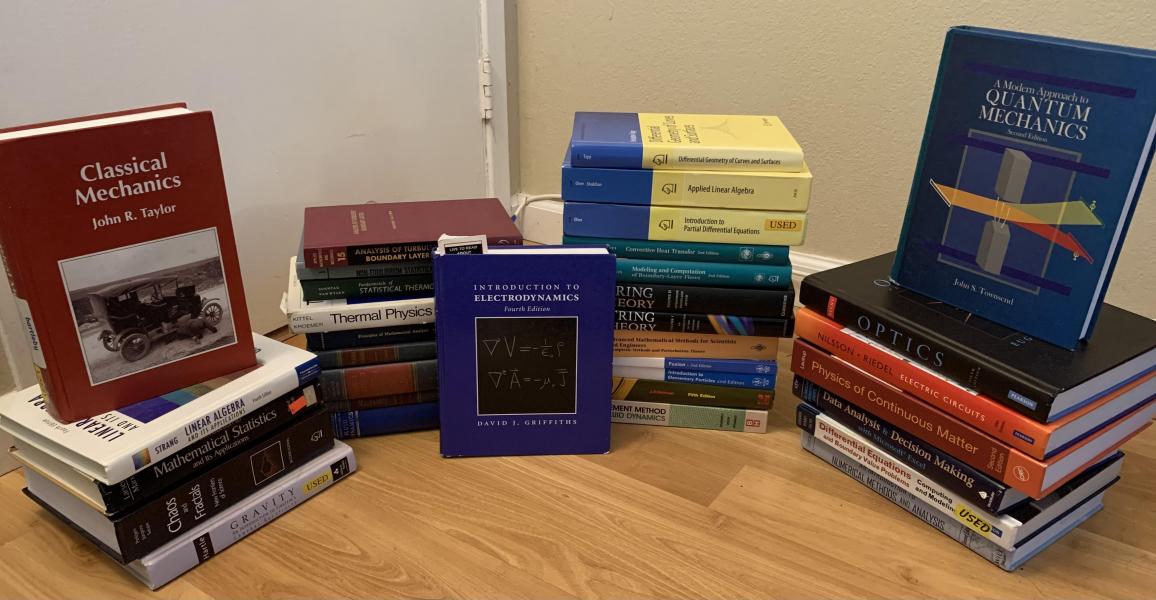 Completing a BS left me with a lot of opinions on what the best books are for undergraduate physics. I personally used most of the books that I am recommending, and they are all either the standard undergraduate text, or justified (in my opinion, which I’ll explain) in being recommended over the standard text. The goal of these books is to bring a student up to speed with the physics developed prior to 1930; the basis for much of contemporary research.

The best books for undergraduate physics are Townsend‘s a Modern Approach to Quantum Mechanics, Taylor’s Classical Mechanics, Griffiths’ Introduction to Electrodynamics, Schroeder’s An Introduction to Thermal Physics, and Hartle’s Gravity. These books cover the topics integral in any undergraduate physics curriculum. As well, they are all exceptionally readable, and provide excellent explanations of the math needed, making it possible to learn the subject through self-study.

Naturally, every book that will be recommended has hundreds of pages, and so a short paragraph stating that they’re the best hardly does them justice. To try to mitigate this, I have sorted the books into “classical” and “modern” physics, so that I can describe the merits and the unique aspects of each choice more thoroughly. Additionally, I have written a short paragraph for each book, so that every suggestion has its unique merits showcased and explained. So without further ado, these are the best physics books for getting up to an undergraduate level, and what makes them so special that they deserve that title.

“Classical” Physics (Before the 20th Century)

The physics studied before the 20th century is much more intuitive than that which was studied during and after. Despite this, it is also much less familiar to the public at large due to its lack of mind bending and public pleasing ideas (think time dilation, or quantum entanglement). However, the subjects which fall into this category provide an integral foundation to the work which was conducted in the 20th century and the work being conducted today. The areas developed before the 20th century (excluding fluid dynamics, which is usually relegated to an engineering department) can be broadly grouped into three areas: Classical Mechanics, Electromagnetism, and Thermal Physics. These fields address “everyday” phenomena such as fridge magnets, the motion of a thrown objects, or melting ice (a specific example of “phase change”). Though not as flashy as Quantum Mechanics or Relativity, Classical Physics is arguably the most important to understand well, and with that in mind, these three books will be your best bet in developing that understanding. 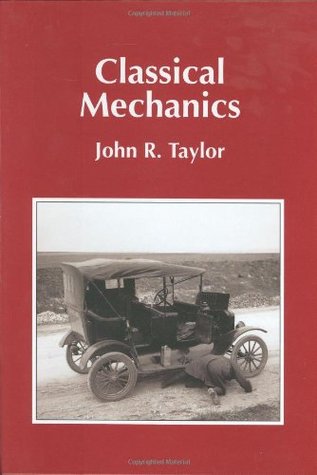 Taylor’s “Big Red Book” is the go-to text for undergraduate classical mechanics. With 786 pages, there is more than enough content to fill a two-course sequence plus additional self-study. This self-study option makes Taylor one of the most student-friendly books in this list. The specialist content such as chaos, continuum mechanics, collision theory, and special relativity makes Taylor Classical Mechanics a book where almost everyone can find a topic that they’re interested in. Additionally, the back ranks the difficulty of every problem and provides the solution to every odd numbered problem, making it an ideal book for self-study. 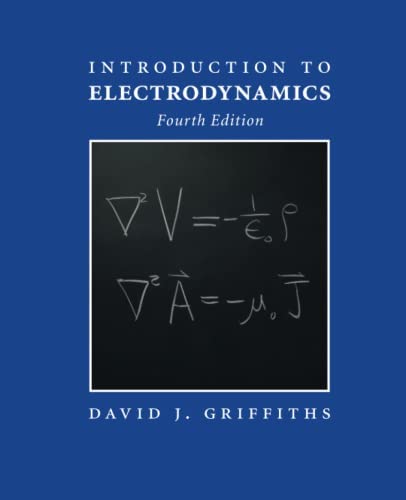 Of the books recommended here, Griffiths’ Introduction to Electrodynamics is both the most well-known, and the most well-loved. The writing is conversational, while keeping pertinent information clear, and the math needed to understand the science is contained either in chapter one as part of the calculus review, or as needed throughout the rest of the text (such as the methods of solving partial differential equations presented in chapter three). Introduction to Electrodynamics covers a wide range of topics—such as E&M radiation, which is useful for astrophysics, E&M waves, which forms the basis of the field of optics, and relativistic E&M, which gives a neat little introduction to the mathematics of special relativity and its application to classical physics—so not only is this book a pretty in-depth introduction to electricity and magnetism, it is also a survey of the field and its applications. 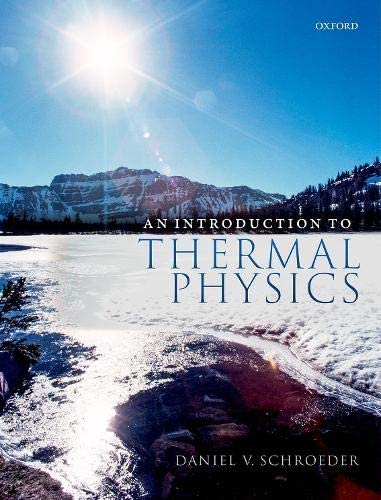 Schroeder’s an Introduction to Thermal Physics

Of the physics subjects explored in the popular sphere, Statistical Mechanics is among the least mentioned. However, this is not because it’s not important, far from it. It appears in almost every modern research group, from condensed matter to plasma physics, forming a cornerstone in scientific progress and solidifying its place as one of the most important subjects to come out of the 19th century. Schroeder’s an Introduction to Thermal Physics is cited as one of the most user-friendly introductions to Statistical Mechanics. The first few chapters start off slow, and then rigor is slowly added until a complete introductory picture of the subject is formed. Additionally, the relatively cheap price (less than $50 for the paperback) prevents a prohibitive barrier of entry to studying through this book.

“Modern” Physics (After the 20th Century)

The physics developed during the 20th century is what most people have heard about from TED talks, popular science books, or sci-fi movies. Time dilation, entanglement, wormholes, it’s all here, and very well encapsulated in two subjects: Quantum Mechanics, and General Relativity. As comforting as it may seem to “only” have to study these two subjects to gain a base-level understanding of the most popularized topics in science, to approach either area one has to have already at least cursorily understood both classical mechanics and electricity and magnetism, as both Quantum Mechanics and Relativity draw heavily from these areas. Assuming that you have already obtained some “class mech” and E&M knowledge, we can safely recommend the following books for you to begin your journey in to pop science. 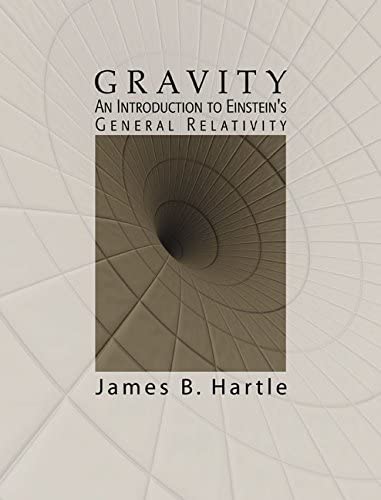 Einstein’s theories of relativity are arguably as conceptually difficult as quantum mechanics, and even more mathematically challenging. This is because relativity is built upon the framework of differential geometry, which even math majors only sometimes take as an upper division elective. Hartle’s Gravity: An Introduction to Einstein’s General Relativity deals with this complexity by leaning on limiting cases in early chapters, and gradually increasing the mathematical sophistication as the book goes on. Ending with hardcore tensor analysis and a derivation of Einstein’s Field Equations. This is made easier through Hartle covering all the new math needed to work on relativistic problems in-depth, and clearly within the book itself, mercifully minimizing the need for additional materials. A further point in favor of Gravity, is Hartle’s astrophysics background bleeding into the specialist material covered: cosmological models, black holes, and gravitational waves. The math material makes Gravity an excellent general reference, whereas the specialist topics serve as a clear introduction to the fundamentals of modern astrophysics and cosmology. 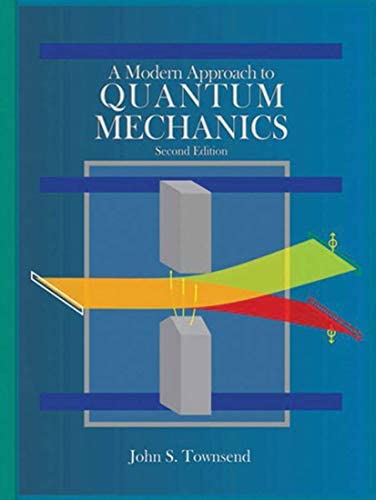 Unlike other undergraduate treatments of Quantum Mechanics, Townsend develops the ideas from the experimental intuition gained from the Stern-Gerlach experiment (the one in which intrinsic spin was visualized). This allows not only for an intuitive understanding of the notoriously confusing topic of spin, but it allows one to attach a physical grounding to one of the most abstract topics in physics. Throughout, the mathematical explanation is lucid, and the methods developed follow the more modern approach of leaning on operator and linear algebra calculations instead of the traditional differential equation methods. Another unique aspect of Townsend’s modern approach to Quantum Mechanics is including an introductory chapter on Richard Feynman’s Path Integral formulation of Quantum Mechanics. Although this formulation makes the calculation of basic systems more difficult, it adds a new way of thinking of how particles interact with the uncertainty principle and is invaluable to approaching Quantum Electrodynamics. This is beyond the scope of an undergraduate curriculum, but has been explained at a surface level by Feynman’s popular science book QED (which you can read more about in our article about our favorite popular science books).

There are thousands upon thousands of books covering physics topics at an undergraduate level. This makes it difficult to decide what to get and considering that each textbook is usually a relatively large investment, it is important to know what you’re getting into. The five textbooks talked about here are very safe bets and present the information in an easily digestible format with excellent explanations, and useful exercises which help solidify the material in your brain. Good luck with your studies and have fun!